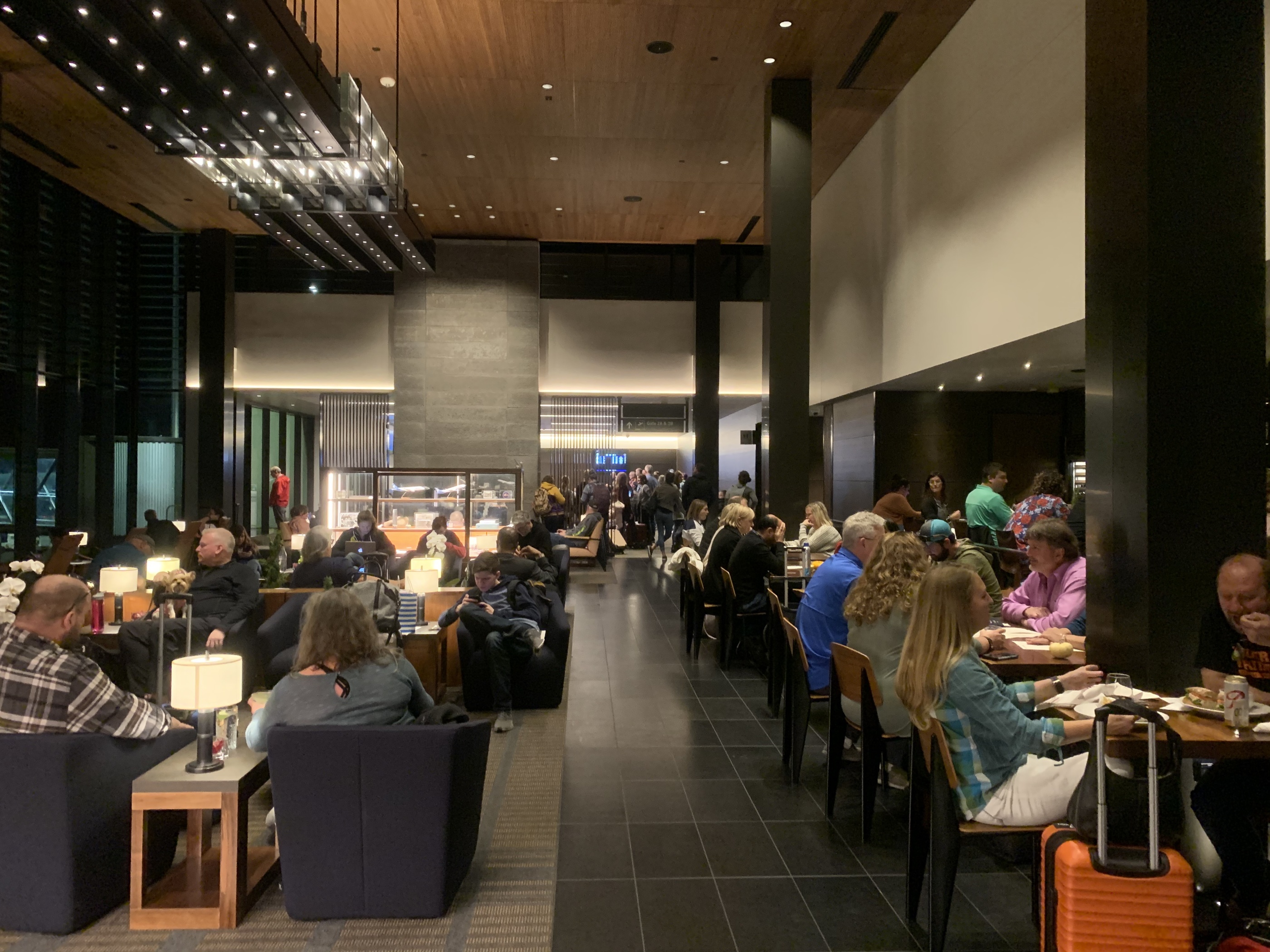 I was reluctant to use and enjoy the airport because of how it directly affects my life, but all of the news from my friends around town were positive and enthusiastic. Some of my friends even said they would NEVER fly out of SeaTac again! I was curious and I was long overdue for a vacation. I booked my first flight on Alaska Airlines and took advantage of one of the late-night flights coming back (for me it’s the 6AM flights that disturb my slumber). All was just as everyone had said, the lines are short and the building itself is visually stunning. The bar was filled with happy people and all was well with the world. Then we boarded the plane excited to take off and peer down below to see if we could spot our house… but there was a mechanical delay. One of the lights wasn’t working and it took about 30 minutes or so to fix. Inconvenient, but fairly standard for airline travel.

We took off on time from Las Vegas Sunday night heading home. The mood on the plane was not as euphoric as it was on the way down… the flight attendant concurred that this is usually the case. We became friendly with her as she was also our attendant on the flight down. When we started to descend, she came by our seats and told us that there was fog at PAE (Paine Field Airport FAA Identifier) and that because the control tower closes at 9PM we couldn’t land there. My husband and I were both a bit surprised to learn this and immediately googled it. Sure enough, the FAA control tower (ATCT) at Paine Field only operates from 7AM to 9PM. She then explains to us that SeaTac does not have room for us, and they are rerouting us to Portland for the night. As you can imagine we had issues with not arriving home that night as planned but there wasn’t much we could do. As we disembarked the plane, we got in line with everyone else to find out what to do next. The Alaska Air customer service employee said that we were all on our own to find and pay for a hotel as the delay was due to weather. It was 11:30PM and all I wanted was to be home in my bed. We tracked down the least expensive available hotel near the airport. It was $155 for the night in a less than desirable room. As you can imagine I was not happy! I called Alaska Airlines to find out what our options were. The first solution they came up with was to fly us to San Diego from Portland then back up to Paine Field. No thank you. The next option was to fly us from Portland to SeaTac. I said that was acceptable, but I wanted them to pay for or supply a way back to Paine Field as that was my final destination. The agent couldn’t guarantee it but said to talk to the customer service desk once I arrived at SeaTac.

Our flight from Portland to SeaTac also experienced a mechanical issue. At this point it was almost comical, so I took to Twitter and complained @AlaskaAir, @PaineField, @CityofMukilteo and @MukilteoBeacon. My point was, that technically our diversion to Portland was not due to weather but the fact that the control tower closes at 9PM. I thought this may be a solution for many of us Mukilteans if flights were only allowed from 7AM to 9PM. Reasonable quiet hours and safety assurance. We were sitting on the plane for almost two hours waiting for a part. Once we arrived into Seattle I immediately went to the customer service desk and talked to an agent who confirmed it with their manager that I could take an Uber home and then call the Alaska Airlines support number in the morning to arrange sending them a copy of the receipt to be reimbursed.

We made it home just after 4PM on Monday about 16 hours late.

The next morning, I called Alaska Airlines. The woman I spoke to sounded incredulous when I explained to her what I wanted. The gentleman at the desk at SeaTac had made notes in my account but apparently, she couldn’t find them. After arguing my point that the control tower being closed was ultimately the real reason, we couldn’t land at PAE she finally acquiesced and agreed to reimburse me for the Uber ride home.

A few hours later I noticed I had a Twitter reply to my complaint from the Alaska Airlines social media manager. See screenshots below the post.

I know other PAE travelers who have had issues with flight delays and diversions too, but the thing that surprises me is that most people do not know they are flying into an uncontrolled airport. Apparently neither does the Alaska Airline social media manager. Some folks may not care but if I can help it, I will schedule my flights for when there is someone in the tower.